Mandela and rivers of cocktails. So Miami.

When you are invited to get to the stage for a kind of award the world’s most creative minds have been striving for the last hundred years (the ADC Annual Awards of Art+Craft in Advertising and Design), you go willy-nilly.
You just go.

On that occasion you are also promised to take part in workshops in which you will get to know yourself in an hour time, become immortal and never be the same again. All this happens in Miami. The pulse of Miami is so indefinable that Bruce Turkel, the famous American brand strategist, created a special expression ‘It’s so Miami’, trying to make it become much more than a mere slogan for a destination. His goal was to make it become a global synonym for all that is simultaneously excessive, contrasting, exotic, dazzling and full of distinctive style, whatever it might be. People in bathing suits and bikinis taking a tour of modern art galleries. It’s so Miami. A young man in his twenties driving a 400,000 $ Lamborghini taking a girlfriend for a 3 $ hot dog. It’s so Miami. Borna Rajić. So Miami.

In order to carry out the task about making Miami become an equally famous tourist destination such as New York or LA, everything that is truly Miami was visualized and verbalized in the campaign, which boosted the visits to record levels. This is a place where anything can be expected and accepted as daily. A place full of life. A place where the license plates are not embossed an emblem, but fruits and inscription: sunshine state.

Already on the first ADC workshop it became clear to us that we will not experience what we are used to: lectures, case studies and moderated discussions. No, here we were forced to hang out. A lot and all the time. Divulge secrets to strangers, draw graffiti, swallow pills that change the taste of food, make cocktails, build sand castles.

When in a casual conversation we asked Philippe Meunier, president of the festival committee, who is also a co-owner of Sid Lee agency, what are the criteria for designing such a program, he replied: ‘The creative process in its most various possible aspects’. They certainly succeeded in it. Among the many workshops we singled out that of a famous creative Jim Riswold, a person who has, among others, made some of the most famous Nike campaigns (Tiger Woods, Spike Lee + Bugs Bunny). It has been several years that due to health problems he has retired and turned himself over to art.
His works deal with death and dictators. At his workshop ‘Mussolini says fuck to cancer’, we were drawing a malignant disease and how Stalin deals with competition. Our view of cancer, which was nothing more than a lump of wrinkled paper, was named the best in the workshop and so we deserved that Jim, who knows well how cancer looks like, pay us respect and toast with vodka. 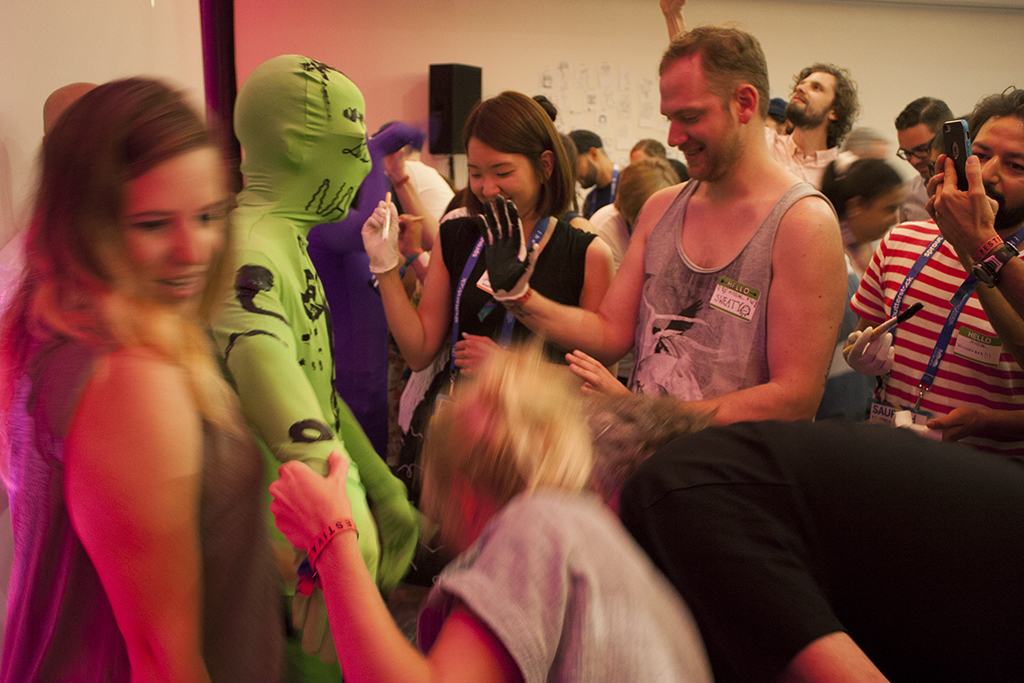 The second workshop, which might not had been so intensely charged with emotions, but was certainly the most visited, was Jessica Walsh and Timothy Goodman’s one: ‘Make it personal and put some quotes on shit’.

It seems that in the United States it is possible that designers are almost something like pop stars. As a business couple Timothy and Jessica who became known with the project ‘40 days of dating‘, if we have understood, a screenplay is being developed as Warner Bros is planning to make a movie.
They both live and work in their studios in New York. Timothy carries it out independently, and Jessica together with the famous Sagmeister. Recently they’ve been collecting shit that people discard and try to breathe new life into it, as we had been doing at the workshops. Initially they tried to make us get drunk because, as they say, these ideas always come to mind when you are drunk. Pop stars, that’s what they are.

And ultimately something about the awards. Awarding had lasted for three nights: In the category digital, advertising & motion the agency Leo Burnett was paramount with the highest number of awards and also awarded a grand prix for ‘Two For One Tickets‘ campaign for ‘du’.
Last evening, tomorrow awards were given and the most interesting project was the interactive glass Hibiki Glass made for Suntory Holdings Limited.

It is our opinion that the best work of this year’s festival comes out from the category Design, illustration & photography, in which our bottle Piquentum was Cube awarded as well.
It is an Interbrand’s craft made for Nelson Mandela’s Children’s Hospital Trust, which is just as we like it. Simple, unassuming, intuitive, logical, with a clear and powerful message. Oh, we love it as if it were our own.

In conclusion … did we, as we were promised, get to know ourselves at this ADC festival ? Of course we did not, for it is still necessary at least one entire life, but we have certainly confirmed something very important, and that is that the most important thing in this job is never ever stop playing.
(This txt was written for portal Media Marketing, published 06/05/2015.)

As part of the opening of the Exhibition of Croatian design 1516 at the Museum of Arts and Crafts, an award ceremony was held and the best design works realized in the last two years were awarded. Among them, Studio Sonda for the best packaging

On the power of creativity

The book On the power of creativity provides an overview of Studio Sonda’s fifteen years of work and activity. It tells the story about how a self-initiated project led to the existence of a creative studio that boasts award winning and globally represented projects. Moreover, Studio Sonda is situated in a village of only about 300 people, Vižinada (Istria), where it significantly affects the development of the environment in which it operates.

Berba tells us that real magic happens on heights that are hard for the eye to grasp, in a story that takes place above the label, in the wine itself